United States and NATO renewed their demand to Allies on raising their military expenses to 2% of national GDP, reproaching Italy for its insufficient 1.1% of GDP allocated to the military. Data from the first annual Report published by the MIL€X Observatory on Italian Military Expenditure – just presented in a press conference at the Italian Parliament – shows that Italy already spends 1.4% of its GDP in line with the NATO average (except US). Italian Defense problem is not under-funding but the irrational and inefficient allocation of resources.

MIL€X 2017 Report introduction underlines that common 2% target pledged at the 2014 NATO summit in Wales is not binding until the Italian Parliament approves it. Moreover, asking Allies to spend ‘more’ rather than ‘better’ penalizes virtuous nations able to spend efficiently and rewards those wasting public money. An absurd request becoming grotesque when NATO praises the bankrupt Greece for its high military expenditure.

According to data analysis produced in the Report, Italy spends too much for its military personnel, in particular for high ranking and non-commissioned officers while neglecting its troops. Also, it emerges that Italy sharply increased expenditure in traditional warfare weapons systems, such as tanks, warships and bombers (+85% compared to 2006), leaving scarce funding for next future scenarios defense systems like cyber defense. The embarrassing result is that Italy spent billions in armaments that can be easily knocked-out by a basic cyber attack.

The Report also highlights the lack of funds specifically allocated for troop training and equipment maintenance, so that the minimum level of readiness is guaranteed only through abroad missions funds. It creates a dangerous paradox: Italian military instrument is not commensurate with national geopolitical tasks and ambitions but, on the contrary, participation in international military operations became vital to support an oversized military instrument, disproportioned both in terms of personnel and equipment.

The MIL€X 2017 Report features exclusive news, in-depth focus and background analysis on major Italian procurement programmes, from the F-35 fighter-bombers to the new aircraft-carrier Trieste, to the new Army‘s armored combat vehicles. The report also includes contributions of Members of Parliament (of both government and opposition parties) about the limited political control over military expenditure in Italy and the consequent boundless influence of military-industrial lobby on Italian Defense budget. 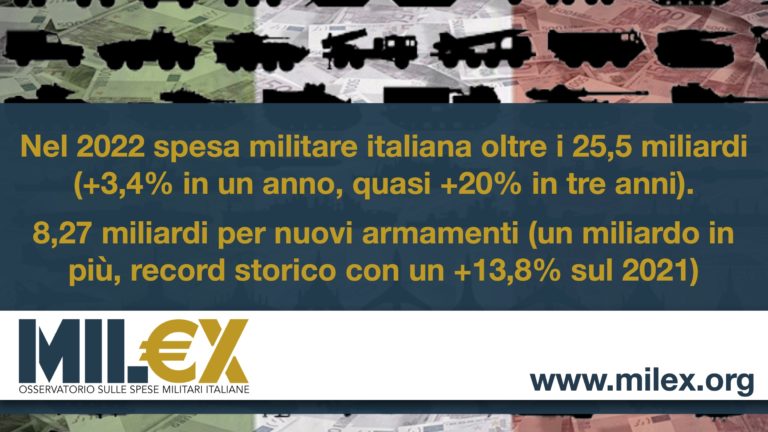